TreeCircus (a.k.a. Trail of Trees) by Tim Womick

About TreeCircus:
TreeCircus is an educational organization that targets public lands like parks and schools with projects and programs that address an array of issues to a diversity of people, with emphasis on the value of the "trees where you live." From stirring school children to a tentative awareness about trees to encouraging advanced instruction of tree care workers, even lobbying elected officials to continue to develop and refine local tree ordinances, all who participate in TreeCircus learn that the caring for the forest where they live is not only good for personal health and the environment, but it's good citizenship, enhancing individual and neighborhood character as well.

About the Presenter:
Tim Womick has performed before a million faces. And, while folks were being entertained via jokes, props and song, they were exposed a bit more deeply to the natural world around them. Like the 19th century Johnny Appleseed who pioneered Pennsylvania, Ohio, and Northern Indiana planting his famous seeds and speaking most poetically about apple trees, since 1990, Tim has traveled much further and wider, sharing his own brand of tree imagery. His fast-paced and highly animated program is “performance art” that will include up to a dozen of students on stage becoming part of the act, perhaps in song, acting like a tree swaying in the wind, or simply becoming an incredibly funny stand-up comic...those who suddenly find themselves beside Tim and in front of everyone generally blossom (or continue to bloom) in their own right. Student participation is what it’s all about.

About the TreeCircus Presentation:
In the TreeCircus session, participants will hear biology basics explained and get a knowledge of trees, learn the value of trees and why we should plant more trees and are encouraged to learn to care for the trees where they live. Audiences are exposed to scientific concepts about earth materials, trees, water, air...all an integral part of the public education system, all important information in elementary school days and beyond. Across the nation educators are searching for ways to make school relevant to students and to curb the number of students who drop out of school. Jump-starting students’ imagination about the world around them, making school and learning more relevant to them is the program’s desired outcome.

Lessons are taught with props as diverse as a large African drum, an abacus, a rayon dress and a squirt bottle. A bird's nest could wind up atop someone's head while another is sporting dark sunglasses and sings like Elvis. Folks in attendance laugh while they learn. Audiences are challenged to think about the trees where they live...it is suggested that later they keep a journal focusing on a certain tree, or speak to others about what they think of trees, opening doors to understanding about our fragile environmental footing and the vital role trees play in sustaining that footing. The objective is to lead people toward a path to better themselves and their communities.

Tim Womick can make a 45-50 minute presentation to groups as large as an entire school during an assembly (500 –1,000 students). If appropriate, a tree is planted following the program. After the performance, he can also present to a smaller group what he calls a “think tank” where 12 or so children take the TreeCircus to a deeper level of critical thinking. 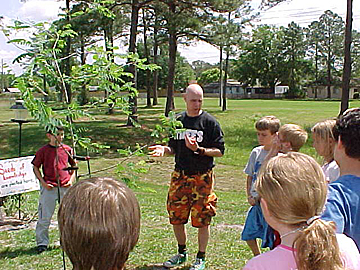